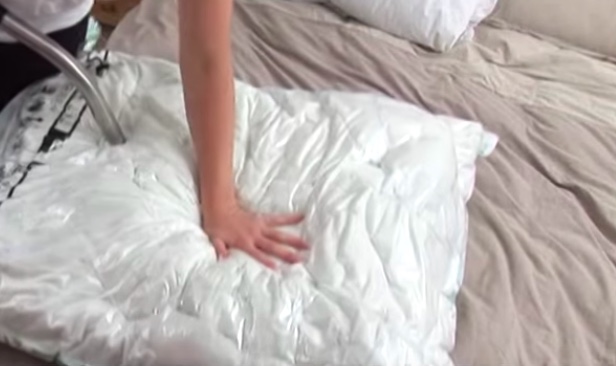 There are many times throughout the year when you may need to get that duvet packed away. For me, it’s storage of spare duvets for guests or when we change over from winter/summer quilts. Duvets are very bulky items that take up a lot of storage. One option is to vacuum pack them into plastic storage bags, but is it okay to do this?

Yes, you can vacuum pack your duvet (or pillows for that matter) but you’ll need a strong large plastic storage bag that can accommodate it. There is a caveat however, I would only recommend vacuum packing hollow fibre (synthetic) filled duvets as there is a risk that feather & down or goose down fillings may deteriorate when vacuum packed, so in this instance, an alternative may be required.

It’s quite common to vacuum pack duvets but it may also be worth looking at some alternatives and I’ve summarised a few of these towards the end of this article. First of all though, its worth checking what filling is in your duvet before you get started.

What Type of Duvet Filling Do You Have?

In the past I would have vacuum packed any of my duvets, however, I’ve learnt that not all duvets should be treated equally. This basically comes down to the filling inside the duvet.

Duvets generally have three types of fillings. The cheapest filling is synthetic hollow fibre. This man-made material is as straightforward as it sounds: its basically strands of fibre that are hollow which helps trap air. A more expensive type of filling is duck feather and down, where both the duck feather and fine layers of down are used as a very effective filling. You can also get goose down duvets which are at least 90% goose down….and quite expensive.

So, what does this have to do with vacuum packing? Well, there is a risk that the feather quills that can be found in the feather filled duvets can snap and the duvet then becomes quite lumpy as the feathers have nothing to support them. Additionally, the problem when vacuum packing down is that the down starts to clump together and again, you end up with a bit of a lumpy duvet.

In reality though, if you have a feather or down duvet you will probably get away with vacuum packing without noticing too much of a difference, it’s just worth being aware of the potential risks. If you duvet is quite old, probably won’t mind much anyway. With a hollow fibre filled duvet, you can vacuum pack with no issues.

Thankfully, vacuum packing a duvet is pretty straightforward and you just need to follow these simple steps:

If you don’t fancy using vacuum storage bags for your duvet then you do have a number of other options:

What do I do if the vacuum storage bag splits? It’s not uncommon for the vacuum bags to split either in storage or when sucking out the air. Go for better quality bags that have stronger plastic and you should be okay. If you do get a tear in one of the bags then this can usually be fixed with good ‘ duct tape.

How long can I keep a duvet stored in a vacuum bag? You can store a duvet in a vacuum storage back for as long as you want. Probably not advisable though and if you’re storing for a long time then at least once per year get the duvet out and check its not damp.

Do I need to do anything with the duvet when I take it out of the vacuum storage back? Not really, just give it a good shake to fluff back up again and have a quick look over it to check for any signs of damp or mould. If you remove it during the warmer months, then throw it over the washing line or airer to freshen it up. 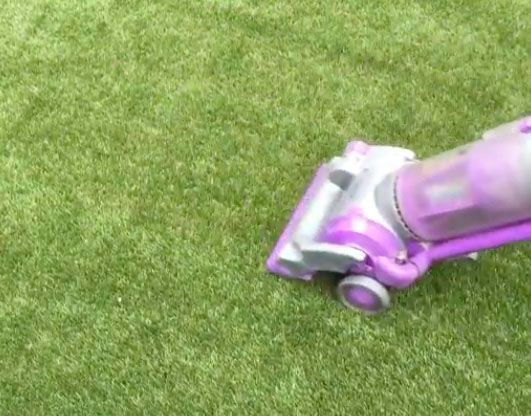 Can You Vacuum Fake Grass? What’s Best for Artificial Lawns?

How to Get Rid of Slugs from Your House: Try These Tips First

How to Get Rid of Slugs from Your House: Try These...

Can You Vacuum Fake Grass? What’s Best for Artificial Lawns?

Can You Vacuum Pack a Duvet? Plus 5 Storage Alternatives